Written by Brian Matthews on October 3, 2016. Posted in Blog

The Athleticism Pyramid and what it means to the Developing Athlete

I have tried unsuccessfully for years to fully express my feelings on what it means to be a good athlete.  Is it sports versatility?  Is it tidily structured in the concrete world of measurables and figures?  Is it a transient blend of many different factors that makes someone special in their sport of choice?  Welcome to the world of grey where there is always a yes and a… no.

I wanted to have an easy, tangible way to explain to my clients the thoughts bouncing around in my skull.  Something clear and crisp.  Something that wouldn’t bore them to tears with the minutia of sports science jargon. Trouble is, I Couldn’t seem to do it.  I’d either end up not being able to find the words on cue, or would end up putting them to sleep with sciencey terms that would make a root canal from a wolverine seem like a better option. Then like a beacon in the night, like a cool oasis in a harsh desert of misinformation and conjecture, I ran into it.  The pyramid of athleticism.  So simple and so digestible that I’m partially frustrated I didn’t come up with it myself. The pictograph (seen below) plays out like the old school food pyramid.  The most essential building blocks are on the bottom with qualities of diminishing importance on the top. 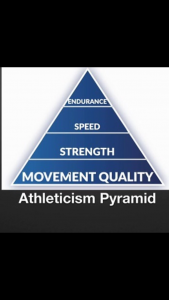 As you can see, the bedrock of athleticism comes from performing high quality movements.  Running, cutting, squatting, pulling, lunging, pressing, dodging, dipping, diving, ducking, and dodging (okay maybe not the last five).  Efficiently propelling your own body through space comes before EVERYTHING. 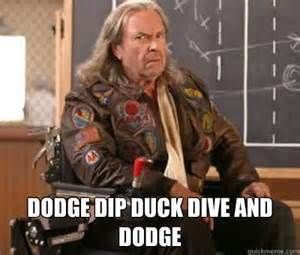 Funny thing is, the majority of people I interact with often flip this paradigm on its head.  Conditioning becomes priority number one.  This overarching desire to get “in shape” for athletic performance is a narrative that needs to be reexamined more critically. I’ll generalize a little here, but for most athletes at the high school and college level how hard is it to get “in shape?”  A month, maybe two if you are someone who struggles with that sort of thing.  And furthermore what is “in shape” anyways?  What energy system are are we attempting to condition?  Anaerobic alactic repeat sprint ability?  Oxidative development?  Lactate threshold?  To me “in shape” is a throwaway term that doesn’t really mean anything. Now think about how hard it is to move well.  It is a lifelong pursuit.  And, one that can look dramatically different for each person.  Each athlete has their own unique injury history, limb length, joint laxity, and motor programming, all of which need to be considered. Once that foundation of solid movement skills has been attained and developed, then we can consider loading the pattern to make it more robust.  Notice I said consider.  Many trainers are too willing to put the cart before the horse and bypass a cleaner movement in order to throw a boat load of weight on their clients.  Hell, in my formative years I used to do it.  If a 200 pound back squat is “good” then clearly a 300 pound one is immeasurably “better.”  Now a slightly wiser me has figure that the only “better” is how the exercise is done, not the weight on the bar. If we get you strong and moving well,  then the next step would be focusing on displaying strength in motion and becoming a faster version of yourself.  Now, this isn’t a completely linear approach.  We aren’t baking a cake here. This is a fluid sort of approach that can vary from athlete to athlete.  But placing conditioning above all other physical qualities is missing the forest for the trees. Here’s the bottom line: moving well is the foundation that strength, speed, and endurance are built on.  Baseball players jogging poles and lineman running gassers, while still present, will hopefully go the way of the dinosaur… unless we are talking the T-rex. Mobile, strong, and fast, that dude was the original Athlete 😉.