Written by Brian Matthews on October 8, 2016. Posted in Blog

I have been very fortunate to work with some pretty special athletes throughout the years.  Wade Hansen is one of them.  I first met Raymertown’s finest, as a fresh-faced high school grad six years ago.  I distinctly remember watching his 6’5″ 210 pound frame sprinting across the Menand’s Farmers Market blacktop and saying to myself, “Well that’s different.”  That big really shouldn’t be that fast.  He was beating college running backs handily and left me thinking, “This kid is gonna be a match-up nightmare.” 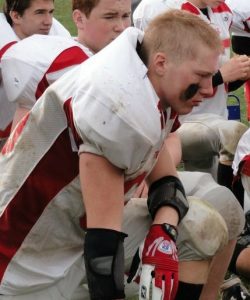 Wade as a lean and mean Tamarac Bengal

Now, Section Two football is famously under-recruited, so it wasn’t surprising that Wade (coming from a Class D school in Tamarac) didn’t have Nick Saban trying to charm him down to Tuscaloosa.  Right or wrong, that just doesn’t happen in the Capital District.  So, Wade went to RPI and proceeded to get bigger (now 250), faster, and stronger.  His sophomore season he really came into his own at defensive end, and made life miserable for the opposing left tackles of the Liberty League. Confident in his abilities, Wade decided to chase a dream and take a stab at playing Division 1 football.  It worked. Blacksburg, Virginia was the place.  Enter sandman, Hokie stone, and Beamer ball.  Wade became a full-fledged member of the Virginia Tech Football Team.  But, now as an offensive lineman.  A position he hadn’t played since he was a mighty Bengal from Brunswick years ago. His first year he red-shirted.  He adapted, got even bigger (now 310), and became a starter.  He performed well enough to start the next year too.  Wouldn’t you know it, Wade gets an invite to a NFL training camp.  The Pittsburgh Steelers of all places.  He nearly made the 53 man roster and as it stands right now, is a phone call away from being with another franchise.  Wade was kind enough to sit down with me for this interview. Brian: When did you first get introduced to strength training? Wade: I would say I really hit it hard my sophomore year of high school.  It kind of clicked for me at that point.  It became such a big factor in how you perform.  At the high school level when you are hitting your growth spurt pretty hard, your body is naturally trying to become beefy haha.  The weight training just helped amplify it. B: Do you feel like it helped you in your athletic journey and if so, how? W: Oh of course, especially when I got to the collegiate level.  Getting bigger, faster, and stronger became such a main thing when trying to adjust to a higher level of play.  And even going to Virginia Tech, changing there, I had to become even bigger, faster, and stronger. B: From what I remember you graduated high school at about 210 pounds and you currently sit around 310.  How did that happen? W: EATING A LOT. B: Do you have an idea of how many calories you were taking in to get to that point?  Was it like five or six thousand a day? W: Closer to seven.  It sounds simple and most people know this, but the key part of gaining that weight was just eating.  Athletes can go into the weight room and get after it, for me that is almost the easy stuff.  Getting the calories and the proper nutrition in your body can be a struggle, especially when you’re trying to put that kind of size on. B: What’s funny for me is I train so many kids that are tipping the scales at about 130 pounds and attempting to put on weight.  They all say they “eat all the time” or something to that effect.  Now, they don’t all necessarily want to play Division 1 offensive line, but I highly doubt they are even taking in half of what you did when you made your big push.  Any foods you really relied on? W: I ate pretty healthy and just ate A LOT. B: You had a pretty unique college experience.  What made you want to try your hand at playing Division 1 ball? 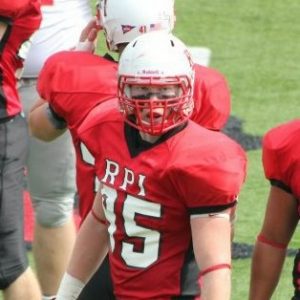 Now at RPI and a cat quick 250 pounds

W: Well RPI was expensive and the way I was performing I thought I could try to play at a higher level. B: I remember watching you play Alfred your sophomore year and you were just eating that poor right tackle alive.  I remember thinking, “Wade looks really good.”  So when I heard you were going to give it a shot I definitely thought you could do it.  What do you think the major differences were between RPI and Virginia Tech? 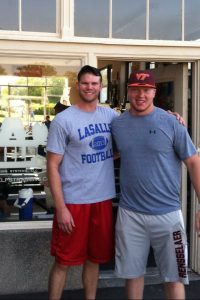 Wade and I before he left for Virginia Tech

W: Overall there’s a big talent difference and  Virginia Tech recruits from everywhere.  You got kids from California, Florida, Texas. B: How do you think your strength and athletic philosophy has changed since you first started working out? W: It has definitely become more positional based now that I’m through high school and college and on to the professional level.  These days I don’t need to be worrying so much about my 40 yard dash.  For me now it’s all about the five to ten yard burst and my lateral movement.  And even now my strength level has to greatly increase with the position and level that I’m in. B: I’m not a huge fan of the term “functional training,” but I guess for you it is kind of the function of a right guard or the function of a left tackle.  You’re big and strong and fast.  Now it’s more about how you need to move your body for the position, what you need to do to diagnose what’s going on defensively, that becomes such a big part of doing your job. W:  Regardless of the position, you have to be an athlete first.  You need good lateral movement and good flexibility.  There isn’t such a thing as a football sprint or a soccer cut.  There’s an athletic base you need to work off of. B: EXACTLY!  Continue to become a better athlete, along with picking up the little nuances of your sport and position.  That being said, how strong do you think is strong enough? W: HAHA…well you have to be as strong as you can be, and still be an athlete.  You gotta move well.  There’s guys at Virginia Tech who were animals in the weight room and they couldn’t tie their shoes.  I had a good squat, but not a tremendous bench or push jerk.  But, that didn’t define me as a football player.  I think because I was able to move well, it helped me tremendously. B: How fast is fast enough? W: The faster you can be the better.  But you have to be under control.  Being able to break down, sink your hips, and stop quickly is also very important. 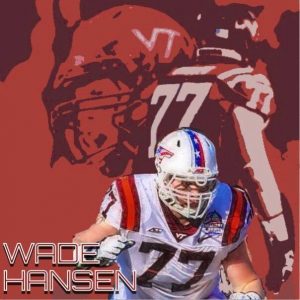 Sitting at 310 and starting for the Hokies

B: Who do you think is the biggest freak you have encountered? W: James Harrison.  Not even close. B: What is he 37 now?  Still playing linebacker in the NFL. W: 37 years old. Six foot, 240 pound powerhouse.  His hands are so quick and so strong that even if you have the reach on him, he’s already past you.  It’s unreal.  His self-maintenance at home is unbelievable too.  Personal masseuse, hyperbolic chambers to sleep in, he’s the real deal. B: What’s the importance of the mental approach to training? W: It all starts with your head.  You have to be mentally prepared and believe in yourself.  Confidence is key, not cockiness.  There’s a huge difference between cocky and confident.  The ability to convince your mind that you can do something is a powerful tool. B: What are some areas you feel you still need to work on? W: I would say I can’t go wrong with change of direction ability and continuing to strength train.  I feel like I am at a good weight, but I’d like to be at a lower body fat percentage at this same weight too. B: Very important questions here to finish up: turkey hunting or deer hunting? W: That’s tough.  I’ve taken more turkeys than deer.  I think the adrenaline rush is the same.  Turkey hunting might be a little more exciting.  Actually, I don’t think I can answer that question haha. B: What’s more challenging: double sessions or a day spent bailing hay? W: Haha. When you got 12 hours of bailing hay it’s pretty grueling, but I think double sessions are probably harder. Mentally tougher.  Hay you can just check out. B: Injuries happen all the time in the pros and you could be one phone call away from being at an NFL franchise for a tryout.  What are you doing to stay ready? W: Right now just doing some positional work and maintaining my strength.  Not build so much because you don’t want to risk injury at this point.  Making sure I’m putting good stuff in my body and just staying ready. B: Any other plans for the future? W: If I don’t get a NFL phone call, I’d really love to become an ENCON officer.  I like the outdoors and it would be a great fit for me I think. B: Thanks a ton for your time Wade.  Everyone in the 518 sports community wishes you the best!