Written by Brian Matthews on October 23, 2016. Posted in Blog

With fall baseball and softball beginning to wind down and more athletes getting back into the weight room, I thought this would be an opportune time to discuss arm care related issues for these types of athletes.  Unfortunately for many, throwing related injuries seem to be at an all time high.  The incidences of Tommy John surgeries, slap tears, and the like have risen at an alarming rate in the past few years.  Causation is varied and many experts have their say in what is leading to this trend.  Depending on who you ask, factors could include (but certainly aren’t limited to) early specialization, little league elbow, lack of a pitch count, imbalance in musculature, poor mechanics, tonic musculature, extreme joint laxity, lack of rest, poor diet, lack of sleep, or potentially the curse of the Billy Goat (okay maybe not that last one).  This can be a rich, dynamic system and pinpointing exactly what is off can often be challenging.  But, there is hope.  Prevention and relief are just a well-managed arm care program away.

A good physical therapist or chiropractor is worth their weight in injury-preventing gold.  In the 518 two specialists that I highly recommend are Dr. Jason Brown from Brown Integrated Chiropractic and Lori ONeill Warner from Proactive Edge Physical Therapy.  Dr. Brown is a veritable maestro of muscular manipulation and practices the highly popular (especially among MLB and college baseball players) Graston Technique.

I encourage consulting with a trained practitioner whenever applicable.  But, if time/financial/logistical constraints don’t allow you to seek out a professional, there are still plenty of options to keep your arm supple, mobile and injury free.  While this isn’t an exhaustive list, it can serve as a resource for helping alleviate nagging injuries, enhance mobility, and make the arm more resilient.

I have used this medieval looking instrument for years and most athletes have claimed immediate relief after use. The Arm Aid is a self myofascial release tool that can work both the flexors and extensors of the forearm.  The beauty in its compact design is that you can use it anywhere.  Dugout, gym, home, it doesn’t matter.  If you have an Arm Aid, you have the ability to massage those oft used forearm muscles.  You can also work trigger points in a modified ART (Active Release Therapy) method explained in the DVD that comes with this instrument.  One slight gripe I have is that working the upper arm with this device is a chore and not super practical considering the current design.  Not a huge deterrent though, as most throwing related issues are relegated to the shoulder and the lower arm.  But, it would be more useful if they modified the design to make it easier to attack the biceps, triceps, and surrounding musculature. 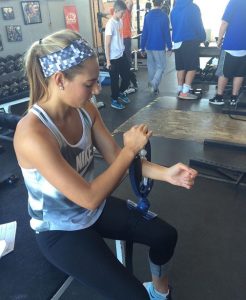 Developed by Chris Duffin (the lightest man to deadlift 900 pounds) and Donnie Thompson (the first man to total 3,000 pounds in powerlifting), the Boomstick and Pain Pill are smaller variations of the body tempering tools initially promoted by Thompson.  Conventional tempering tools run on the larger side and aren’t manageable for working the comparatively smaller arm muscles, joints, and fascia.  Weighing in at 22 and 44 pounds respectively, these tools enable the athlete to work the arm and shoulder musculature without having to deal with the sheer bulk of the bigger implements (90 and 130 pounds can be a challenge to maneuver for most folks).  Duffin also offers video tutorials on the proper use of these devices on his website

One shortcoming of this tool is that optimizing it to its full potential can be a two person process.  Not always, but depending on what area you are attempting to get at, you may need another set of hands.

I have a set of Rogue VooDoo Bands, but there are various companies that provide this same product.  This thin strip of rubber works by way of ischemic therapy.  Isch what?  No, that’s not a German curse word.  It’s actually a fancy way of saying blood flow restriction.  The main principle behind this modality is that the compressive properties of the band, inhibit blood flow to the area wrapped.  Often after throwing the athlete undergoes swelling in the elbow or the shoulder.  VooDoo Bands assist in pushing out the excess fluid that accumulated as a response to the trauma of throwing.  Removal of this fluid also enables the joints to “centrate” and become realigned in a more favorable mechanical position that the previous swelling would have prohibited.  When the band is released, blood surges into the area that was wrapped.  This influx of blood aids in healing by pumping nutrients into the effected area and pulling waste products out.  There aren’t a ton of studies on the efficacy of this treatment, but real world application has many athletes from sprinters to throwers, touting the benefits of VooDoo Bands. 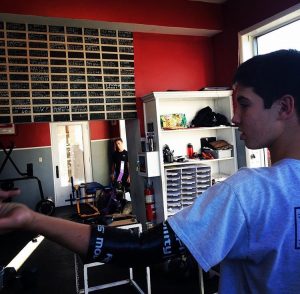 Throwing a five to seven ounce orb with maximum velocity can ravage the shoulder and elbow.  Extreme forces take place on the arm from the end of the “cocking” phase to the release phase.  Start to finish, this process takes roughly 50 milliseconds.  Short of sprinting and blinking, this is one of the fastest movements in the human kinematic arsenal.  Throwing is highly flexor dominant, with the wrist snapping down violently as the ball is released.  For this reason, having a strong opposite side of the wrist can help distribute the force more efficiently and lead to less tonicity in the flexors.  Exercises that focus on these rarely used extensors are critical in keeping the elbow healthy and functioning properly.  We do a wide variety of extensor work in the gym, hitting everything from standard wrist extension exercises, to flashier options like Zottman Curls and Thor’s Hammer.

Donnie Thompson once said, “If you can’t move it, you can’t train it.”  So let’s get moving!  The scapula and adjoining cuff muscles play an integral role in decelerating the arm while throwing (making sure your arm doesn’t come out of the socket, pretty important I’d say).  Strong, mobile, and healthy scaps are hugely important in staying injury free for general population folks, but are critical for throwing athletes.  This could be an entire blog post in it of itself, so I will gloss over a lot in this analysis.  The ability to have adequate motor control, stability, and muscle synergy in this area is a must in keeping throwers healthy.  A great resource I stumbled upon recently is an eBook entitled Simple Shoulder Solution by Max Shank. 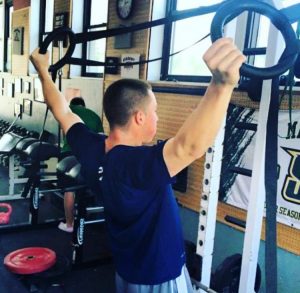 Slow-motion video analysis apps, like Dart Fish and Coaches Eye, have become all the rage in the physical preparation circle.  Most of these apps are inexpensive, efficient ways to really get a visual of what is going on in the throwing process.  The average human eye can only operate at 45 frames per second.  Coaches eye can film at 240 fps with a slow motion feature.  This enables the viewer the ability to see things that we simply can’t with the naked eye. From here, we can pick up on mechanical flaws in the motion and formulate a plan to correct these issues.  I use Coaches Eye with my throwing, running and lifting athletes and provide instant feedback to improve their performance.

If you are hurt you can’t play.  Hopefully the options presented here can serve as a resource to keep you or your athlete injury free and dominating on the field of play.