Written by Brian Matthews on October 30, 2016. Posted in Blog

We are all just a kid from somewhere.  Tyler Gagnon happens to be from Grafton, New York and is one of the hardest working athletes I’ve had the pleasure of training.  I first met Tyler his sophomore year of high school and watched him transform from a husky kid with a lot of drive, into a Division 1 running back that I wouldn’t want to tackle with a truck.  Tyler was kind enough to sit down with me for an interview.  I hope that it can serve as a resource for parents and athletes as to the amount of hard work required to play collegiate athletics. Brian: How has strength training influenced you as an athlete? Tyler: Strength training has completely changed my life and abilities as an athlete.  Growing up I was always an athletic kid, but once I started strength training I saw a major difference in my body and abilities such as speed, agility, and overall strength.  Without strength training, I can’t see myself playing football in college at all, let alone 1-AA. B: You had a pretty dramatic shift in your body composition, speed, and athleticism from when I first met you to now.  How did that happen? T: I was tired of being overweight and out of shape, so I decided to start eating better and really committing to my weight training.  I don’t believe I’ve missed a workout since my freshman year of high school, and a lot of the times I would even workout twice a day.  I decided that where I was physically at that period in time was nowhere near good enough if I wanted to accomplish my goals. As I started to see change, I just kept raising the bar for myself rather than becoming content. 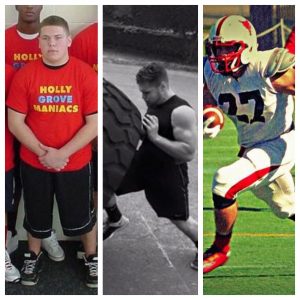 B: You have played many different levels of football, from Class D in high school to AA, and from junior college to 1-AA.  What are the main differences you experienced at each level? T: The biggest differences between the levels for me were the in game speed, size of the players, and the amount of preparation that goes into each game.  As I moved up everything moved faster, not only the players, but the time in between each play as well.  The preparation aspect was the biggest change.  In high school I barely watched any type of film, compared to watching film for an hour a day with the team and then having to watch more film on your own.  It’s basically a job on top of schoolwork now.  B: You are one of the hardest working, most consistent athletes I’ve ever been around.  How did you develop that work ethic? T: Beginning with pop warner, I was never just handed a starting role.  Even though my father was on the coaching staff, I had to earn my spot.  I’ve always believed that I am the best player on the field at any given time.  Even if that may not be true, that is the mindset I have going into games and offseason training.  I wouldn’t let anyone out work me, and if someone was slated ahead of me on the depth chart I wouldn’t get upset and sulk about it.  I would find out what I needed to improve on and work even harder in order to earn my spot.  I won’t allow myself to settle for anything less than achieving my full potential. B: Has your training philosophy changed through the years? T: At the beginning I used to focus so much on the numbers in the weight room, and would be really hard on myself if I didn’t hit the numbers I knew I could.  Now when I’m training it’s not so much about doing the most weight possible, but rather doing a weight or exercise that is going to translate well to the playing field and help me become the best football player I can be, instead of just the strongest football player. B: How important is your mental approach to your sports performance? T: My mental approach is very important to my performance.  If I’m not 100% bought in to my training or practice, I can feel the difference in my play and know that it’s not at the level it could be. There’s a difference in just showing up and being at practice or in the weight room, and giving it your all every session. 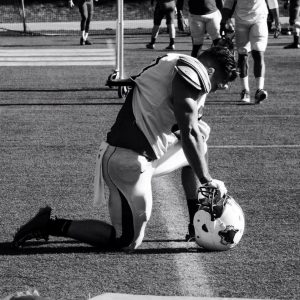 B: Take us through a day during the season. T: The majority of my days start with a 5:50 a.m. wake up call followed by special teams and position meetings running from 6:15-7:30.  After the meetings we’ll have a practice from 8:30-10:30 followed by a team lift.  I’m usually done with football for the day around noon.  Based on when I have class that day, I’ll work for a few hours on campus as an athletic grounds crew and then attend my classes and try to get back in bed for the night around 10 if possible. B: Is there a player in the Pioneer conference that has better hair than you? T: I’m not going to say that I have the best hair in the conference, but I will say it’ll be pretty hard to top mine. B: What drives you to do well? T: I’ve been told by my peers and coaches in the past that I would never be good enough to play D1 football, or fast enough to play running back.  I’ve used that to fuel me.  I want to be successful for myself and to make my family proud of me, but that extra motivation to prove those people wrong has really pushed me farther in my life. B: The Brunswick Bulldogs have had a couple guys in NFL training camps recently (Wade Hansen and Jordan Canzeri).  Is there something in the water out there? T: I wouldn’t say that there is anything special in the water, but I will say that there was a mentality playing for the Bulldogs that we were going to be the toughest team on the field at all times.  And being a pop warner team in a small town no one really expected guys to even have a shot at playing D1 football, let alone the NFL.  There’s a chip on our shoulders to show that it doesn’t matter where you’re from, and that we’re good enough to play with anyone. 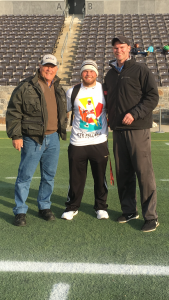 Coach Rapp, Tyler and I

B: What do you need to improve on? T: I always feel that I can improve on all aspects of my game, but if I had to focus on a few things in particular I would have to say my lateral speed, and top speed. B: How do you want to finish the season? T: At the end of the day, I’d love to see my role in the offense expanded, but if I can walk away with a PFL Championship ring on my finger I would be pretty satisfied. B: Who is the biggest freak you have played with/against? T: The biggest freaks I’ve had to play against, because it would be hard to pick just one guy, would be the Hutchinson Community College Dragons.  Their 11 starters on defense all transferred to SEC schools the following season.  One player in particular, easily laid the hardest hit I’ve ever taken and is now the starting outside line backer for Texas A&M. B: What does the future hold for Tyler? T: As of right now, all my options are open.  I’m pretty set on taking a 5th year, but following that I’m not entirely sure what I want to do yet.  Athletic training is a possibility, along with coaching, but like I said everything is still a possibility. B: Thank you for your time.  The whole Section II football community is proud of your accomplishments and looks forward to seeing what you achieve next.