Written by Brian Matthews on December 5, 2016. Posted in Blog

I’m thankful to be able to share these interviews with you folks. I do them for a number of reasons. One, I’d like to give the college athletes I have worked with a little shine.  It’s not always a fun or easy task to balance school, sports and social life and I appreciate their efforts to go above and beyond the norm.  Two, I want to share more content on my site and interviews are a nice way to meet that end. Finally, and maybe the most important reason of all: is to give the high school athletes and parents I interact with a realistic insight on what it really means to play at the next level. Hopefully after reading these the kids I work with can have a newfound appreciation of the sweat equity needed to play college sports. Ryan Henchey is the first college baseball player I have featured in these and is a time management master. Taking a heavy course load in accounting at Ithaca, working and playing for one of the best D3 programs in the country has given him a great perspective on prioritizing and attacking his goals. He’s also one of the nicest and hardest working kids to come out of the 518. I thank him for agreeing to do this interview and hope he has a great spring in Bomber blue and white! Brian: How has strength training influenced you as an athlete? Ryan: Since I have been strength training I have noticed an increase in size, and my power in baseball has also improved greatly. Strength training has not only improved my game physically, but mentally as well. B:Have you seen any big athleticism, strength or size gains from strength training? R:When I first started weight lifting, it was tough to get into it because of the soreness and tiredness, but as soon as I saw results then I wanted to lift more. I have noticed through working out you are able to make jumps to higher weight. Once you see yourself plateauing you can add a variation to the lift. For example, you can go lighter weight and do a couple second hold for squat or have a slow count on the way down. This has improved my strength and has increased my gains as far as putting on more weight. 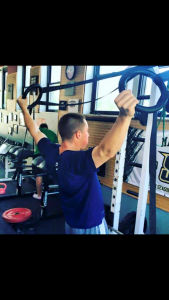 B: You have played at many different levels of baseball. From high school, to elite travel ball, to college and twilight. What are the main differences you see in each level? R: High school baseball you see a lot of raw talent, but never quite focus on the little things. I have noticed that facing a kid who throws 90 in high school, but may not hit his spots well or even have a secondary pitch is not as effective as someone who throws 85 with a variety of pitches he can throw for strikes. College baseball it is all the kids who were the “studs” at their high school. The coaches in college focus on the little things which translate into the big things when put in a game time situation. For example, taking a base on a dirt ball may not have been as important in high school, but for college 90 feet could mean a win or loss. B: Some kids seem to coast in the summer, you always seem to find time to train even when working a 9-5 and playing twilight. How did you develop that work ethic? R: The biggest thing for me is seeing improvements because when you look and feel good, then you should do well in the game. Baseball is a very humbling sport, and you cannot be too comfortable because there is always something you can better. Although working full time is tough at times when trying to work out and play, I come to realize that what makes me perform well during the game is due to strength training. The mentality of getting better and trying to achieve that “All-American” title in college baseball is what pushes me every day. Obviously, you are there for the team, but you have to improve yourself in order to contribute more. Work ethic is developed over time, but the best way to improve is by setting a goal, and once you achieve one then you set another one. 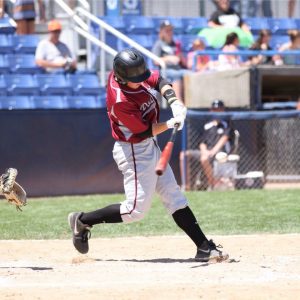 B: Has your training philosophy changed through the years? R: My dad has always been into weightlifting and believes that it is a key contributor to my success in baseball thus far. He drilled the importance of strength training at a young age. I wouldn’t say my philosophy has changed, but I sought out new information from different sources and used it when applicable. B: How important is your mental approach to your sports performance? R: Baseball is a very mental sport, and everyone stresses on having a short memory. It is a long game with a lot of innings, and a lot can happen in an inning. You should hate losing more than you love winning. Using that as motivation allows you to go out there and outperform your opponent. Confidence is key, and for me being a catcher if I am confident then the pitcher will be confident, which then radiates throughout the rest of the team. As the catcher, everyone can see your emotions, so if they see you are moping around then they will think it is okay to do it. Being confident behind the dish helps others out on the team to relax, and eventually play to the best of their ability. B: Take us through a day during the season R: We have around 4-5 games on a normal week. Our conference has schools that a relatively close, so if it is a mid-week game then we will leave in the morning to go to our game, and then head home that same night. On off days we will have class until about noon, and have to be at the field by three for a 4 o’ clock practice. During practice, we will do BP on the field, bullpens, and we have conditioning station that we do behind the field on the turf infield. After practice, we are done unless you need treatment for an injury, and then you eat…A lot! I have noticed in season it is very easy to skip meals and lose weight; therefore, you need to plan out your day to make time to eat. B: What are your thoughts on vision training for baseball players? R: The first time I tried vision training was this past summer, and I thought it was great experience. There is always a lot of skill building and strength training, but for baseball you need to be able to see the ball to hit it. People seem to forget the importance of increasing your hand-eye coordination. I started off the summer in a bit of slump, but then I started using the vision training that Brian put me on. I ended up doing well at the end of the summer, and my team won the Stan Musial World Series. 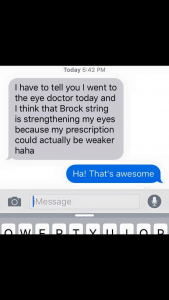 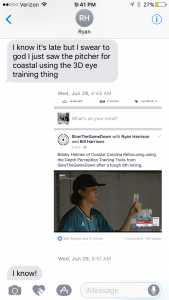 Another text, Slow the game down to help refocus

B: What drives you to do well? R: I have always had the attitude of hating to lose. It can be in ping pong, eating food, running, anything that you can make competitive. I think the fear of losing pushes me that much harder. As I mentioned before confidence is the best thing especially in catchers. Everyone is looking at you, and if they see you’re down, then your team will have the same attitude. So, what drives me is being able to win as a team, and I would like to help in whatever way I can. B: Any big goals for your upcoming senior season? R: My personal goals this season are to hit .380 plus with 8 or more home runs. Last year, I ended up getting injured which took me out for a couple weeks, and slowed my bat down a bit. I would also like to be an All -American, to say that you achieved something like that is and always has been a dream of mine. I think as far as team goal, we would like to win our third national championship. We have a very talented team, and we came so close to making regional’s last year that it left a bitter taste in everyone’s mouth. We want more this year. B: What do you need to improve on? R: I would like to obviously improve on my strength, but more specifically I would like to work my power. Getting the ball to jump off the bat, and work those quick twitch muscle fibers. Skill wise, I could be playing in the infield a little bit this year, so I would need to work on grounders. As a catcher, it should not be too difficult because it is also a reactionary position where you need to be on your toes at all times. B: Do the Cubs repeat? R: I could see the Cubs repeating because you can tell that the chemistry on that team is better than any other team in the MLB. The team is young, energetic and just a great team to watch. They had three pitchers that dominate, and offensively could be the best team in the MLB. So, I would say next year they could repeat it, especially, now that Kyle Schwarber is back and healthy. B: How do you want to end the season? R: I would like to end a season as a national champion just like everyone else. It is everyone’s goal to end up at the highest stage that they can reach and achieving the ultimate victory. B: Who is the biggest freak you have played with/against? R: The biggest freak I have every played with would probably one of my great friends growing up and even now Kevin Smith. He has always been a very athletic individual growing up, and has impressed everyone as far as what he can do on the field. But it has not come easy for him by any means, he had put a lot of time in the cages and in the weight room. Considering that he could be in the top couple rounds I would say he impressed more than just our community, but obviously caught the scouts attention as well. He is a great player as far as talent goes, but he is an even better teammate. B: What does the future hold for Ryan Henchey? R: I am a senior accounting major at Ithaca college, and I will be returning to Ithaca next year to complete my masters. After that I would like to pursue a career in my field of study, but if another opportunity arises that peaks my interest then I will do what is best for me. I think at this point in life you try new things and hope for the best. B: Thanks for your time Ryan and best of luck this spring!