Written by Brian Matthews on January 15, 2017. Posted in Blog

My memory often gets a little hazy in my advanced age, but I think it was either Connor Terry or Nick Delollo that told me that I needed to get Ben Beaury into the gym.  Beaury already had a good reputation in the area as a very well balanced athlete (soccer, basketball, and baseball).  But, the word on the street was that he would rather take a penalty kick from Messi than set foot in a weight room.  An unfair characterization today, but looking back, Beaury himself might say there was a little truth to that. Now a days, you can’t keep that kid away from training.  Lifting, running, jumping, visual work- he does it all with a purpose.  He’s always 15 minutes early and is a great example for the young athletes that work out with him.  Beaury’s hard work has paid off.  Last summer he played with Reading United, a professional development affiliate with the Major League Soccer team the Philadelphia Union.  This fall Beaury was named to the NSCAA All America Third Team.  Beaury was kind enough to do this interview with me. Brian: How has strength training influenced you as an athlete? Ben: Strength training has really helped me prevent injuries and improve my athletic performance.

Beaury showing off his hops

Brian: Have you seen any big athleticism, strength or size gains from training? Ben: From when I first started lifting to now, I have definitely gained strength and size, and with that I have also become more athletic. Brian: You have played soccer at many different levels- from high school to elite travel ball to college to professional development.  What are the main differences you see in each level? Ben: As you move up levels the main differences would be the speed of play and the IQ of each player.  It’s amazing. Brian: You never miss a workout and are ALWAYS early.  How did you develop that work ethic? Ben: I love to get after it and get better whenever I can.  I do whatever I can to avoid missing. Brian: Has your training philosophy changed throughout the years? Ben: As I have gotten older I’ve learned to truly value training.  If you want to perform at a high level, you have to train and prepare at a high level. Brian: How important is your mental approach to your sports performance? Ben: Mental approach is very important.  You could be having a tough day in the classroom, but then you have to walk down to the locker room and go out to practice and prepare for a huge game on the next day.  You have to turn the switch on and be focused and forget about everything outside the lines. Brian: Take us through a day during the season. Ben: Go to class, eat lunch, back to class, down to the locker room, and head out to training.  Practice would last for about two hours or so.  Then I’d go eat dinner with the team.  Then it’s back to your room to do homework, study, or relax.  Each day is somewhat the same, unless we are traveling.  When we travel each school is at least four hours away, unless we are playing against St. Rose. Brian: What are your thoughts on vision training for goalies? Ben: Vision training for goalies is huge.  We have to pick up the ball as soon as we can and watch it all the way into our hands, so our eyes are very important. Brian: You were a pretty good basketball and baseball player.  Do you ever miss it? Ben: I do miss basketball and baseball.  Only playing one sport in college is different than playing many in high school.  It’s still kind of weird finishing the soccer season and not preparing for basketball season. Brian: Who wins in a grappling match- you, or your brother Brian (who just happens to be a world class Jujitsu competitor)? Ben: I give myself five seconds before I can’t breathe in a grappling match with him. Haha. Brian: What drives you to do well? Ben: I’m addicted to winning and I want to be the best.  My father instilled a desire to be mentally tough from a young age and I think that has stuck with me.  I got some pretty cool awards this off-season, and I am driven to stay focused and win them again. 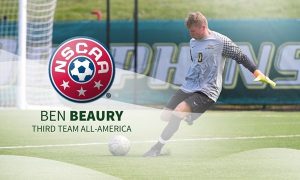 Brian: What do you need to improve upon? Ben: I have never been a vocal person.  Most keepers are crazy and yell a lot.  I need to be more vocal and demanding of my teammates.  To take my game to the next level I need to improve on owning the goal box.  Crosses, corners, through balls, they are all mine.  I also need to become a better leader.  Going into my senior year next season and having started every game of my career, a lot of younger players will look up to me and I need to be ready for that. Brian: What does team USA need to do to be competitive in international play? Ben: Team USA should be very competitive this upcoming year.  Bruce Arena has experience as the USMNT coach and was successful, so he knows what it takes.  The group of players he invited to the January camp was interesting.  He left out players that I thought would be there and added some new faces.  There is a lot of talent and it will be exciting to see if they can come together as a team and win. Brian: What are your goals for the upcoming college season? Ben: I want my team to win the regular season.  Every year we have moved up in the NE-10.  Last season we finished third.  I also want to make the NCAA tournament for a third straight year, and get past the first round.  I would also like to be NE-10 goalkeeper of the year again, and win All-Region and All-American honors again. Brian: Who is the biggest freak you have played with or against? Ben: This past summer we did a lot of training with the Bethlehem Steel of the Unites Soccer League.  Every player there was a freak.  One guy that stood out was Derrick Jones.  He has gone on to sign with the Philadelphia Union at age 19. Brian: What does the future hold for Ben Beaury? Ben: I think the future looks very bright.  My coach this summer told me that if I clean up a few things I will be doing this for a living.  It is my dream to continue playing soccer after college.  If soccer does not work out, I have been working hard in the classroom as well and will graduated with a business management degree. Brian: Thanks Ben.  All of us in the 518 are rooting for your continued success!