Written by Brian Matthews on January 30, 2017. Posted in Blog

Patience In The Process

“Just because something isn’t happening for you right now, doesn’t mean it will never happen.” 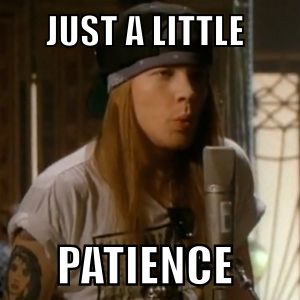 W. Axl Rose knew the value in a killer whistling solo AND being patient.

4.5 forties, 300 pound bench presses, dunking a basketball, starting on varsity, a full depth squat, moving pain free- whatever the objective, chances are it requires some degree of sweat equity to achieve it.  Furthermore, it make take some time.  Long, arduous, self-doubting time. Trouble is, in our instant gratification society, we want it yesterday. We want it to be easy and we often complain if we don’t get it.  Not starting?  Must be the coach’s fault.  Came up short on that rebound?  Must have been wearing the wrong type of sneaker.  Didn’t get the test score you wanted? Must be the teacher’s fault.  This reactionary, finger pointing mindset laughs at the “process” and puts the onus on others. To me it’s a dangerous philosophy that discounts the value of hard work, and emphasizes looking for the easy way out.  But, here’s the great thing about those who take the easy way… they get exposed.  You can’t pretend to be strong or fast or lean or any other physical trait in competition.  Fake it till you make it doesn’t fly in the world of W’s and L’s. The majority of clients that I train are in high school.  Anyone who has lived through that hormonal quagmire can attest that those four years can be crucial in defining who you are as a person going forward.  I have the absolute privilege of working with some amazing teens, and have been wowed by the effort, commitment and care for others I see in the sessions they attend. That being said, many lack the life experience to properly put athletics into perspective.  Hot and cold?  How about surface of the sun vs. absolute zero.  I’d see a kid hit a big dead-lift and I’d swear he turned into Apollo the Sun God.  Fifteen minutes later, he comes up short on his previous chin-up effort and his body language turned into Eeyore in a rainstorm. 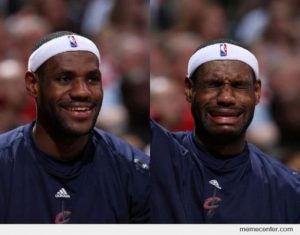 There will be difficulty and there will be setbacks.  It’s inevitable.  However, it’s in these moments that one must accept this is part of what you signed up for.  One must learn to use difficultly as feedback, not as a stopping point.  Embrace that slow, challenging process. 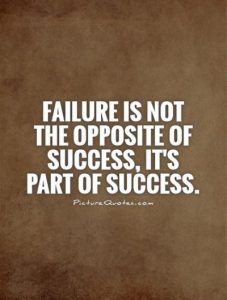 This “embracing the process” phrase has caught on like wildfire in the past year or so.  Check Instagram, tune in to a NFL game, or watch a Joel Embiid (who has actually gone as far as nick naming himself “The Process”) interview, and folks are embracing this idea wholeheartedly. 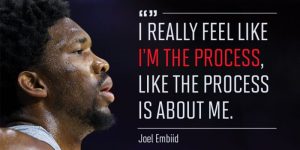 Part of it is marketing.  Like most things marketing related, some find it cheesier than a Sunday in Lambeau.  Others repost, reshare and are inspired like never before.  Neither outlook is right nor wrong.  For me, I just think it’s cool that people are starting to openly discuss that there is a whole lot of work required to gain anything of substance. I had an athlete hit a PR yesterday that he had failed on a couple times before.  He was disappointed in his previous attempts, but stayed patient and used his failure as fuel.  I congratulated him today via text.  His response, “Thanks, was so happy when I got it.”  He worked hard, the process was embraced, and eventually he hit his goal. That right there is exactly why I do this.