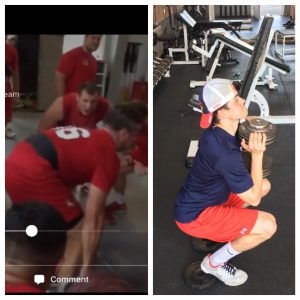 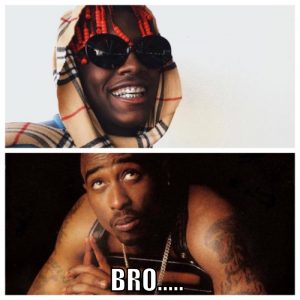 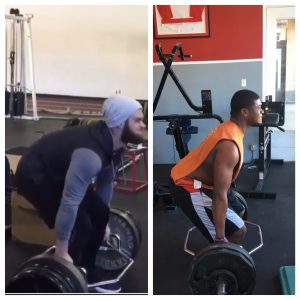 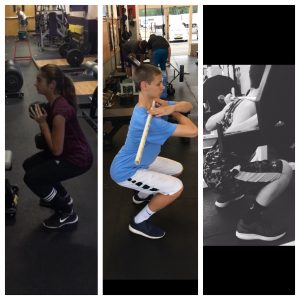 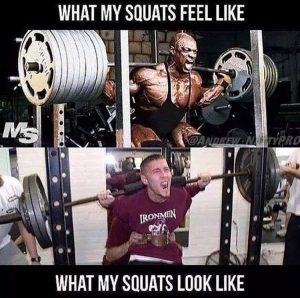 For me the positivity scale starts somewhere around the music of Type O Negative and ends in the vicinity of the final scene in Rudy.  Nick DeVito’s contagious enthusiasm just might make that famous Golden Domer look like Peter Steele.  I’ve known Nick for several years now and have been impressed with his efforts in the gym and on the ice.  But, I’ve been most proud of watching the way he interacts with younger athletes.  Nick gets to know, encourages, and cracks up younger kids that most college athletes wouldn’t even bother to say “hey” to.  That to me says more about who this young man is than any goal, assist, or personal record ever will (though, those are nice too).  Averill Park’s very own was nice enough to agree to do this interview with me.

Brian: How has strength training influenced you as an athlete? Nick: It has influenced me greatly.  It allows you to be at peak performance on the ice.  Your shot becomes harder, your skating becomes more powerful, and your ability to fend off opponents and puck protect becomes better as well. All things that are extremely necessary, especially for a smaller guy like me. B: Have you seen any big athleticism, strength, or size gains from training? N: I have certainly seen some gains.  It may not show up with my overall weight, but getting faster, more powerful, and stronger certainly has come from being in the weight room.  Every summer I see myself get stronger and stronger, and it’s something that will translate into my hockey games. Nick benching nearly 100 pounds over his body weight B: You have played hockey at many different levels- from high school, to prep, to juniors, and now your a college level athlete.  What are the main differences you have seen at each level? N: The main differences between each level are the speed of the game, how little time you have to make a play, and how strong and big some of the opponents are.  People do not get smaller as you go up in level.  They only get bigger. But like I said, the speed of the game is the biggest difference.  It just gets faster and faster. B: Some kids seem to coast in the summer, yet you always seem to find time to train even when working.  How did you develop that work ethic? N: I think work ethic starts from your parents and understanding how hard they work to allow you to follow your dreams.  On top of that, there is always another kid that wants what you want.  In order to be better than him, you cannot coast.  Follow your goals and keep working.  I certainly have my parents to thank for my work ethic. 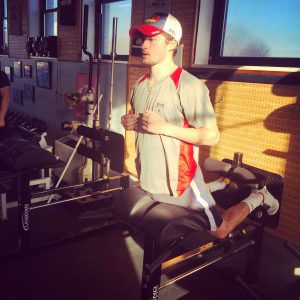 B: How has your training philosophy changed through the years? N: I believe it has changed through the years.  You need to be willing to learn new things as you’re training.  There is always another exercise or method that can get you better.  Incorporating those new exercises with the old ones is how you improve. B: How important is your mental approach to your sports performance? N: My mental approach is huge when it comes to my performance, especially right before a game.  Your focus and confidence is critical.  Understanding before the game what you want to do on the ice, and believing that you can accomplish your goals for each game, is what allows you to play well.  For me a loose approach to a game doesn’t allow me to be ready for that puck drop.  I need to get in the zone, and visualize what I need to do in order to help my team be successful. 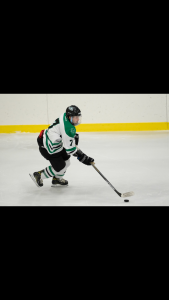 B: How important is your warm-up to your success on the ice? N: This is extremely important.  I find that in order for me to be completely ready for game time, I need to get a good sweat going in warm-ups.  I have to get my legs going and feel fully stretched out in order to feel like I am ready for the game. B: Take us through a day during the season. N: I’ll take you through a Friday- game day.  I wake up and head to class at 9:00 am.  After class I head over to the rink for a 10:30 pre-game skate.  I do this to feel the puck on my stick, feel the ice, and make sure my skates and everything else are ready for that night’s game.  After the skate, I head over to the cafeteria for some lunch before my last class at 1:00 pm. When I’m finished with that class, I head back to my place and take a quick nap.  Next I grab a pre-game meal, normally Subway.  I then throw my suit on for home games and head over to the rink at 5:00 pm for warm-ups.  And then it’s game time at 7:00 pm.   B: What drives you to do well? N: I would say the feeling of success.  I love feeling like I have succeeded.  Who doesn’t?  I enjoy striving to be the best. B: Your team just managed to beat the number 4 and number 12 teams in the country in back to back weeks.  How do you want to finish the season? N: Well, beating those opponents were two huge team efforts.  We still have the ability to make playoffs if we sweep Cortland this upcoming weekend, which would be awesome. B: What do you need to improve on? N: You can always improve.  I want to be faster and stronger, and a little bit bigger.  When you are satisfied that is when someone has the opportunity to take your job.  I always want to improve in every facet of my game. 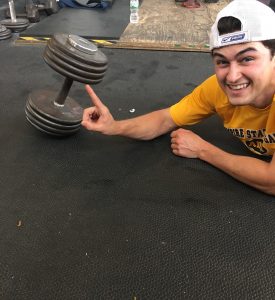 Showing off his sense of humor and unparalleled finger strength

B: Sidney Crosby, G.O.A.T. or bum? N: He’s the best player in the game.  Everyone knows it.  He’s smooth on the ice, knows exactly where to be, and the puck finds him.  The puck always finds the good players. B: Who is the biggest freak you have played with or against? N: Tyler Kelleher.  I played youth hockey with this guy, and against him growing up.  He’s a senior at University of New Hampshire now.  I think he is tied for second place in D1 in scoring.  He’s shorter than me, but man can he play. I’ve never seen anything like it.  He’s a pure scorer. B: You do a great job of giving back to younger athletes, whether it’s volunteering on and off the ice or just being an awesome positive force in the gym.  What shaped your attitude in that regard? N: I think what shaped this attitude is what people did for me growing up.  Every kid looks up to someone.  I just enjoy giving the kids the opportunity to have someone to look up to.  I enjoy trying to make them the best they can be from as early an age as possible. 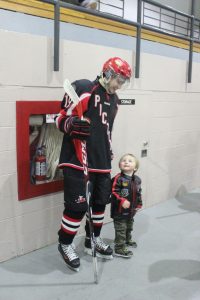 All about the kids

B: What does the future hold for Nick DeVito? N: I want to play professional hockey- maybe over in Europe.  I definitely want to see what I can do with this sport and I’m certainly looking forward to seeing what is in store for me.