The summer can be a great time to lounge on the lake, work on your tan, or read a new book.  For athletes, I think it’s a tremendous opportunity to take your physical preparation up a notch.  In no particular order, here are some points worth considering when planning out these upcoming months. 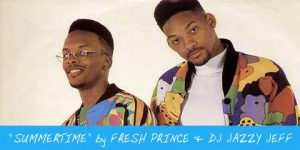 These two got after it from June through August.

Sprint more. Jog less. It’s 2017.  Cars will soon be driving themselves, you can 3D print a house, and by some feat of black magic, I can now get delivery from Amazon on Sundays.  But, the most incredible thing I’ve seen recently is that athletes are still attempting to get faster by jogging.  Now, I don’t hate jogging inherently.  For some populations it can be a fun and rewarding sort of thing.  But, for athletes trying to actually get faster?  Please God, no.  I’d rather hear a tape recording of Fran Drescher laughing for an hour than listen to another athlete tell me they are jogging to get faster. Sprinting is a beautiful thing.  It’s Neuro-muscularly dense with highly choreographed limb movements, and at the highest levels both graceful and violent.  Jogging? Sorry, there ain’t a ton of grace and violence required to slog out a 10 min mile.  I deal in getting kids faster, not slower. Here’s what gets me about the jogging stuff.  If I want to train my body to be really fast, why would I do that by going really slow?  Sprint!  Sprint with a purpose.  Sprint well.  Video yourself sprinting and see what you need to work on.  Speed kills.  Don’t kill speed by jogging the life out of it this summer. Practice Your Sport This is mainly a dig at football players, but this premise can easily be extended into other sports realms as well.  As a former slightly above average college football player, I have actually lived it.  In my playing days I set up shop in the weight room all summer long. One year I worked at a camp from June to August and didn’t have access to a car.  So I’d bike every day after work to a gym to get mah swellz on.  Five to eight hours a week on biceps and triceps, zero hours a week on backpedaling and pass rushing.  Well-intentioned for sure and my arms looked great, but misguided none the less. Now, I always work something sporting into my athletes’ warm ups prior to the weight work.  Route trees for wide outs, medicine ball suplexes for wrestlers, or defensive slides for hoopers.  I will find some exercises that transfer to competition and will aid the athlete in their sport of choice. Take an Active Role While I want to avoid throwing TOO much information at my charges to avoid a paralysis by analysis issue, I think most of the “best” athletes I’ve trained don’t just take everything I say for granted.  They question, try to find out more, and if possible I point them in that direction.  There is tremendous value in learning something new.  Read a book or talk to someone who has been around the water cooler for more than a week.  The “why” behind the “what” should be a feature your trainer can explain in some sort of detail. 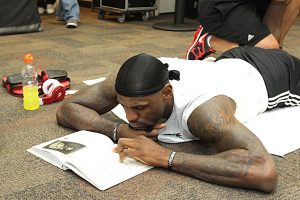 There’s one very successful college athlete that I haven’t worked out in years, yet I still text frequently with training talk.  The kid does his homework and then some.  He reads, listens to podcasts, experiments on himself.  It’s pretty cool watching from the sidelines and seeing the work he is putting into his craft.  You need to take ownership.  The information is out there.  Find some reputable sources and don’t just blindly follow one idea or philosophy. Find a body weight that works for you, your sport, and your position I’m talking to you 150 pound linemen and 125 pound pitchers.  Force = mass x acceleration, right?  It’s tough to deliver a blow or throw something really fast if you are having trouble filling out a medium sized t-shirt.  At 16 or 17 a 190 pound left tackle might work for the high school level.  Or maybe, you’ve got some good junk that transcends your slighter frame in the schoolboy ranks. 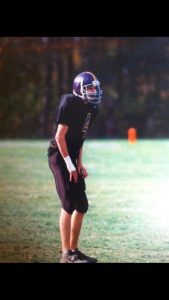 180 in high school might be a little thin for a college linebacker (that’s me ha!) 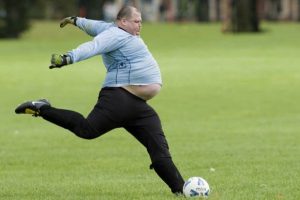 Also not the prototypical look for a goalie

But, eventually you are going to have to get large enough for the level you are playing at.  Sure there are outliers, smaller guys in the professional ranks.  But those are generally the types of players with off the charts athleticism. Look at the level you are trying to play at and see where you stack up with your size, athleticism, and skill set.  Target what you need to improve and attack it. Strength Train with a Purpose I love 1×20,  I also love 5,3,1 and believe it or not, I have seen good results from 5×5.  You know what I like the best though?  Trying really hard.  While methods are important, the effort and application will trump the program nearly every time.  The pursuit of getting better with every workout is a fundamental part of all of this. There are smart ways to train.  There also isn’t a magic bean.  Realize that effort and working smart are your best friends on this odyssey.  Two focused days a week beats five half-assed sessions every time.  More is not better, better is better.  Train, recover, and reap the benefits. Measure Your Progress Feeling like you are stronger or are jumping higher is a nice thing.  But wouldn’t you want to know it too?  Find a strength or athletic measurable that makes sense for your sport, test it, then retest after several weeks.  If you have gotten better continue what you are doing.  If not, get back to the drawing board. 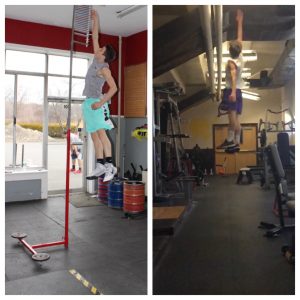