Written by Brian Matthews on January 1, 2018. Posted in Blog

As the year comes to a close, I’m looking back on some of the eurekas and re-eurakas I encountered in my seminar circuit, reading, and gym chatter.  In no particular order, I have drummed up a list of the five biggest hitters that blipped across my radar this year.  Here’s to a happy, prosperous, and athletic 2018! The List   RPR In October of 2017 I joined a club- a league of not so extraordinary men and women that wanted to learn something extraordinary.  Inclusion in this league didn’t come with a time share in the Carolinas or a chance to drive a Mary Kay caddy.  In fact, the material wares one picks up for membership pale in comparison to the intellectual capital this enabled me to pass on to my clients. 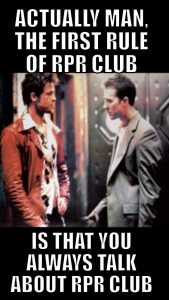 I feel like I’ve entered into a world of reverse fight club, with the first rule being- I really want to talk about RPR. There’s only 541 members on the Facebook RPR account.  Each curious sole in that clan took a metaphorical red pill to hack human performance.  I wish 541 million folks were included in that facebook account.  That’s how strongly I feel about RPR/ Be Activated.  While there are a laundry list of benefits to this system, for me the best feature is once you get it you can take ownership of your body. In the medical/sports/rehab/injury prevention world, there is a general underlying vibe of learned helplessness.  You have x wrong with you… run to the doctors.  Y hurts… time to see the chiropractor.  Z feels tight… is the trainer available?  Don’t get me wrong, there are reasons that you need to spend close to a decade getting degrees in high levels of medicine.  And I would love to have a seasoned surgeon operate on me if I broke a leg or got a nasty cut.  The traumatic acute injuries that athletes run into are unfortunate and best tended to by those highly skilled professionals.  But, the chronic bad back or constant hamstring pulls that many athletes suffer from, I honestly believe can be fixed by yourself. Knowledge is power and the learning of muscle activation can be the keystone that health and performance is built on.  These quick links can give you an idea on what this whole movement is about.  Check them out.  Or, schedule a session with me and let’s see if you can start feeling and moving better. Daily skill work, less strength work Weird to hear a guy who works in the world of getting athletes bigger/faster/stronger to prescribe less time lifting. But, here we are.  I deal with mostly high school athletes.  And quite honestly, for the average high school athlete 1-2 lifts a week, consistently over the course of the year, is more than enough of a stimulus to get bigger, faster, and stronger.  Now, some kids love the Iron more than Tony Stark loves a new maroon and gold suit. But, let’s not forget that you do not get stronger in the weight room.  You get stronger recovering from the weight room. 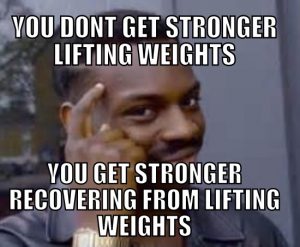 The daily sets of max effort squatting, 400 meter runs until you barf, and sleeping like Malcom McDowell in a clockwork orange often do more harm than good.  Remember, I work with athletes that have a relatively young training age.  I want to slow cook the means of adaptation as long as I can.  Many coaches use advanced methods on athletes that are way too young.  No reason to use a wrecking ball when a hammer will do.  To that end, if your 13 year old athlete’s training “cup” can hold 12 ounces, why would you dump a gallon on them? The skill stuff is something that you can certainly work on with more regularity.  Ball handling for basketball players, fielding for baseball athletes, and stick work for lacrosse players can be done on a daily basis.  All of those movements are low intensity and easily recoverable. The faster and more intense the movement – throwing a baseball, sprinting, tackling, lifting- the more time you need to recover.  MLB pitchers don’t throw 100 balls a day.  NFL guys don’t play 5 games a week.  Olympic runners don’t maximally rip out 2,000 meters of daily sprinting.  Likewise, your young athlete shouldn’t lift as hard as they can every single day. Do you look/measure up with what you are trying to be? Dream big young athletes.  But, also be conscious of what you are dreaming about.  There are levels to each rung of the sport’s ladder you climb, and at some point you are going to have to stack up to a base standard.  Looking to play running back in high school?  Tremendous.  But, if you run a 7.5 40 and can’t do a single body weight push-up, well sorry son, you are going to be in for a rude awakening. Want to throw 60 mph and pitch for the local summer league softball powerhouse?  Awesome.  But, if you weigh 95 pounds soaking wet and broad jump 4 feet? Good luck young lass.  Maybe it’s because I have been doing this for so long and it’s in my wheelhouse, but to me it is pretty easy to see if you measure up or not.  Sure there are outliers that break the mold, but I wouldn’t bet the farm on being one of them. Generally speaking there’s is a size, strength and speed standard for each sport. Move better, get stronger, master your sport skills, and stack up with the physicality of whatever level you are shooting for. Big names in the industry are surprisingly accessible I have been fortunate enough to do some freelance work for a national publication (hint, it rhymes with “Hustle and Witness”).  In that capacity, I have had the opportunity to interview some titans in the field.  With their vaunted resumes and jam packed schedules, it would be exceedingly easy for them to say they don’t have the time or even blow me off all together.  Not one has. 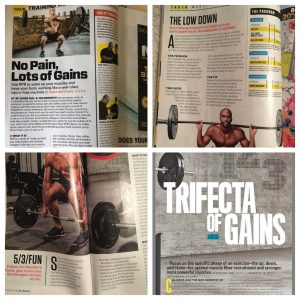 In fact, their willingness to work with me and tremendous professionalism through the process, has reaffirmed that it takes a whole lot of people-skills to get to an appreciable level of success in the athletic performance field.  Results matter and knowledge matters, but being a good person matters just as much. Visual athletes NEED to Visually Train This idea falls in line with the daily skill work idea (meaning you can do this frequently).  The human eye is controlled by six muscles and like the other 314 bilateral muscles in your body, they too can be trained.  However, most athletes train their eyes about as often as the Buffalo Bills make the playoffs (mama we made it!).  There are some great resources out there for visual training.  Slow the Game Down, and Max bp, are completely game changing in my opinion.  You just have to use them with fidelity. 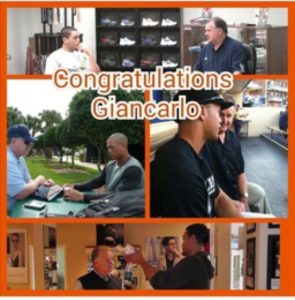 Reigning NL MVP and current Yankee Giancarlo Stanton has worked with slow the game down for 10 years.