Written by Brian Matthews on December 27, 2018. Posted in Blog

If speed is king, then change of direction/agility is an ambitious prince waiting to snatch the throne. Linear, maximal effort sprinting is extremely important in many team sports. Whether covering a kick in football, clearing a ball in lacrosse or tracking a fly in softball- there are many scenarios where an player needs to get from point A to point B as rapidly as possible. But, the ability for an athlete to switch up tempos, feign a movement and go in the opposite direction happens more frequently than just bombing down the field or court like a cheetah in gym socks. 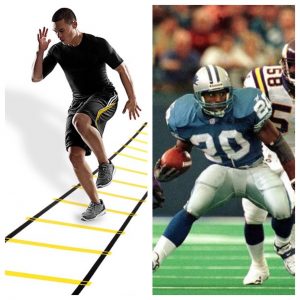 This quality, traditionally referred to as change of direction or agility, has become a hot little item in the world of strength and conditioning.  Once thought of as interchangeable terms, they have since split ways and have two different definitions based on new criteria.  One of the major differences in separating the two lies in anticipation and how the brain reacts to outside stimuli. I will now refer to change of direction (closed) as one quality and agility (open) as another. Change of direction drills are largely closed in nature-meaning they are scripted. They follow a set pattern the athlete needs to track and complete as quickly as possible.  They are a major component of many combine style events like a lane agility drill for basketball players or a pro agility drill for football athletes. They can tell coaches a lot about how quickly an athlete can stop and start within the confines of the drill in question. The big hang up many folks have with the closed change of direction drills is they remove the reactivity out of the equation completely. These drills are robotic, can be broken down to the step in an attempt to shave time off of the clock and aren’t a true representation of what happens in sports.  The argument for agility drills over COD drills is true agility is a cognitive animal.  They are open in nature. A beast that relies heavily on timing, visual processing, perception, anticipation and reaction. Now, some coaches rely heavily on the closed approach, others keep it completely open and some combine a blend of the two.  There isn’t necessarily a right or wrong attack on how one gets their athletes flying around the field or court.  The purpose of this article is to break down the differences between the two, give some examples, list pros and cons and give some practical experience I have seen in my years doing this. Some examples of closed change of direction drills would be an agility ladder, 3 cone agility drill, L drill, NBA lane agility test or running a route tree in football. The pattern is set, predictable and intended to be performed as quickly as possible. These are intended to practice movement patterns that can be used in sport and clean up any deficiencies the coach can see when the athlete is performing the drill. Some of these movements are hugely important in sports mastery. A wide receiver running a route tree on air or post player perfecting their footwork on the block can benefit tremendously from hammering those skills daily. The knock on them however is there is no opposing player to react off of, which again is the basis of all things sporting. Pros Can practice “perfect” cutting/movement mechanics. Can do an exact movement one would use in ideal sport conditions. Can slow down the steps in the process and script the pattern exactly. Don’t require another player to perform.   Cons Many closed drills don’t transfer over to sport (Icky shuffle on a ladder for example). No reactive visual stimulus involved. Could argue aren’t as “fun” as many open agility drills. Not a ton of variety.   Open agility drills have become extremely attractive in recent years because of the reactive element that is omnipresent in all things sport.  The reaction could come from a ball, opposing player, visual stimulus or auditory cue.  They are a better indicator of how the athlete will perform on the field/court as the reaction/anticipation feature of athletics often separates the good from the great. Think about Barry Sanders in his prime, #20 in blue was moving like Baryshnikov in shoulder pads based off how the other players moved on the field. 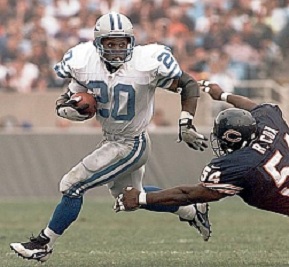 The king of shake and bake

Pros Closer representation of what happens in sport Oodles of movement variability Fun and competitive Can practice sports timing     Cons Not as precise movement patters Usually need another person to practice   I have and still use both approaches.  If there was an athlete I was working with that had to get really good at the NFL pro agility drill (closed) it just makes sense to practice that drill and get really good at it. Also, it can be a good drill for younger athletes to work cutting off of both feet.  You can take it a step further, take that closed look and make it open with having one athlete react off of the other (a closed open look if you will). When you think about it, many sports do have that closed open feature.  A receiver running a post knows where they should be making their break in the route (closed), but may have to alter the cut based off of the coverage (open). A basketball player dribbling around a screen (closed) may have to shift their offensive strategy depending on how the defender approaches the screen (open). Click this link for a couple closed/open options. A blend of both strategies is important to not only work the movement you are attempting to do but to add real world sport application as well.  Have fun with it, pick drills that transfer, move with intent and PLEASE don’t spend all day just doing the Icky shuffle ;).